” O Captain , my captain … Who knows where that comes from ? Anybody ? Not a clue ? It’s from a poem by Walt Whitman about Mr. Abraham Lincoln . Now in this class you can either call me Mr. Keating , or if you’re slightly more daring , O Captain , my Captain .

Why do I stand up here ? Anybody ? I stand upon my desk to remind myself that we must constantly look at things in a different way . They’re not that different from you are they ? Same haircuts , full of hormones just like you . Invincible , just like you feel . The world is their oyster . They believe they’re destined for great things , just like many of you , their eyes are full of hope , just like you . Did they wait until it was too late to make from their lives even one iota of what they were capable ? Because , you see gentlemen , these boys are now fertilizing daffodils . But if you listen real close , you can hear them whisper their legacy to you . Go on , lean in – listen , you hear it ? … Carpe … hear it ? … Carpe , carpe dime , seize the day boys , make your lives extraordinary .  Boys , you must strive to find your own voice . Because the longer you wait to begin , the less likely you are to find it at all . Thoreau said , ” Most men lead lives of quiet desperation “. Don’t be resigned to that . Break Out “! 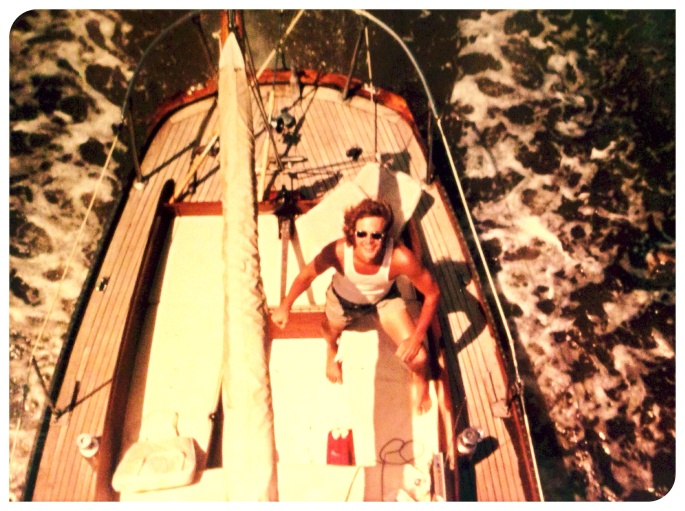 Dave and I were enjoying cooler temperatures outside , sleeping in the cockpit until about 1:00 am when gale winds off Lake Michigan brought us a pounding rain . We tumbled below and soon fell fast asleep .

The morning of our second day started at 9:00 am and all hands decided our days should start earlier . The wind might be better then . We’ll have to wait and see . After showers and a filling breakfast of sliced oranges , apples , pears and bacon sandwiches , we left Grand Haven about 10:30 am . The chores on board will have to be done after the days sailing , which is another reason for early morning departures .

Buzz was putting on the airs of the skipper this morning , noticed by Dave and Dale also . I hope this skipper syndrome will not endanger the harmony of the whole .

I’m studying the Rules of the Road and keeping busy with little odd jobs . The weather is clear and warm but the tremendous  winds of last night are nowhere to be found . We are having trouble with our gearshift ; it slips out of high into low without the constant pressure of a cord holding it back .

We sighted two large freighters leaving the Port of Muskegon today around 2:30 ; our first , but hardly our last . One was carrying cars on its deck and we cut his wake about 75 yards behind him . We waited just long enough to hear his warning blast before we came about .

we cruised under power all day keeping busy or amused with repairs and games . Dales constant adjustment of the water pump grease and discovery of another cooling system turn-off kept the engine temperature down .

The day began clear and sunny but ended overcast and sprinkling . Dale and Buzz argued about weather for awhile ; betting on the coming of rain . When it just barely sprinkled , they couldn’t decide who had won , so they called it off .

We argued about who should be assigned to wash the dishes while we ate a supper of canned beans , carrots , buttered bread and a quart of milk .

No showers for us tonight , but no slip fee either . We’re running low on ice and will buy some tomorrow . Buzz has an alarm clock and we’ll wake up early tomorrow . It’s raining lightly and Dave’s watching  Columbo on TV.

We called home to another world tonight and I didn’t know what to say even though I wanted to say something .

We have to check the charts , weather reports and call Coast Guard tomorrow to inform them of our ETA . 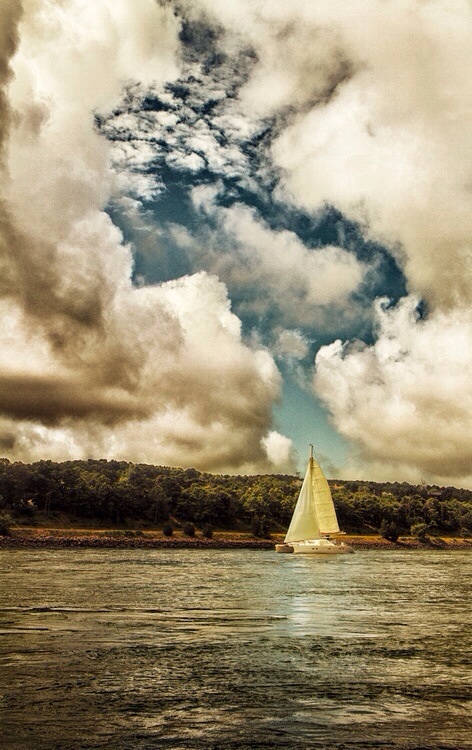 As soon as the light begins to stream thru the gaps in the curtains , casting it’s strange reflections of Lake Michigan onto the wood planks of their cabin , Dave would arise to throw open the shutters and each time  wonder at the beauty that rushed in and exploded like the thrill of heeling over as “Ventures” sails filled , being pushed by the wind with speed picking up over the vast waters . All four crew-mates would admire the awesome sea with the orange dinghy tied behind the boat , bobbing in the waves with the mist rising above the dark wooded hills on the shore , and the way the first freighter of the morning joined in the current as it cut thru the open water , hissing like a ghost . They would gaze at this brilliantly colored realm to see a glorious and mysterious whole , their souls rejoicing to be alive , humbled at being part of something even greater .

” If people stayed outside and looked at the stars each night , I’ll bet they would live a lot differently “.

Seeing the ghosts of ancient ships lost like the Egyptian city of Heracleion sunken and shrouded in myths and legends , made them contemplate the largeness of history and their own smallness . They became drunk on the intense infinity shimmering all around them and it would sometimes overtake them .

Note from ghost-writer : I hope you will hear Dave , Buzz , Chris and Dale speaking to you on their journey from the Great Lakes to the Bahamas … It is a true story about the essence of friendship , adventure  , love , anger , surprise , anxiety , joy and tragedy , life and death . The words from Chris’ journal are in their original form … I will note the order with each post with a number placed behind the title “Beatitude Point” in hopes you won’t get lost … Thankyou for being interested …