I haven’t been out of the village for over a month until once again going to Plovdiv for the third time the other day . I had run out of drawing paper and all of my pens were dry . But once I had arrived the shops didn’t interest me this time and I didn’t desire anything the way I did before , not even the beautiful European clothes in the windows . So I sat in the park and watched the people of this foreign land . Is it true that no two humans look exactly alike ? Does that mean thru out all of history too ?

An old man gazed at me and I thought he was Ulysses . And some young girls looked like Trojan women . I was sitting near an olive tree wondering if I might decide to travel to Istanbul before leaving here the first of April . It’s a bit risky as my visa has expired now and yet it’s so close with buses leaving and returning three times a day and I could stay over nite in a hostel since my responsibilities with the home owner in Gita end a week before my flight home . The cultural crossroad between Eastern Europe and Asia and the market stalls of Turkey are a huge lure .

I had an hour before the bus left so up the hill I wandered into the old part of the city to the church I had been in before . From my travel book I remembered that it was St. Haralambos Day . I was not prepared ( I never seem to be here in Bulgaria ) for the inner beauty I found on this rather melancholy day . Hundreds of jars of honey in the form of a cross appeared looking like fire from all the candles lit and the glowing chandeliers  . I learned that when consecrated , honey is believed to possess curitive and magical power . All the faces were illuminated and the high priest chanted . 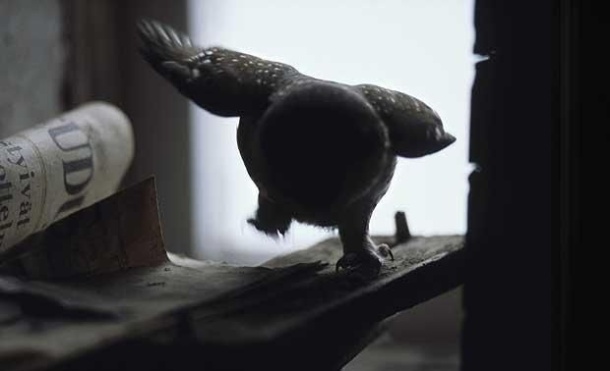 This morning when I went to let the dogs out from the back studio room , I found Polly dead … not in her bed but laying in a cardboard box she had never laid in before . I started to cry a lot . I will have to bury her now . I’ve never done this before . I carried her out and laid her in the grass where I washed her stiff body with warm water and some dried lavender … then watched the sun dry her and made her paw nails as white as I could … wrapped her then like a baby in her favorite blanket … she was curled up on her side … and I placed her in a two foot hole I had dug … she liked to eat the fallen walnuts so I put some in the grave next to her for her departure back into the earth … and on top of the black soil I placed three large stones … she is in the apple orchard now .  I wish I could have embalmed her little animal body with oils and salts and spices and wrapped her instead in linen bandages preserving her for a passage to immortality in paradise . I would have decorated a wooden casing for her to lie in with gold leaf and written , ” Farewell Polly “. 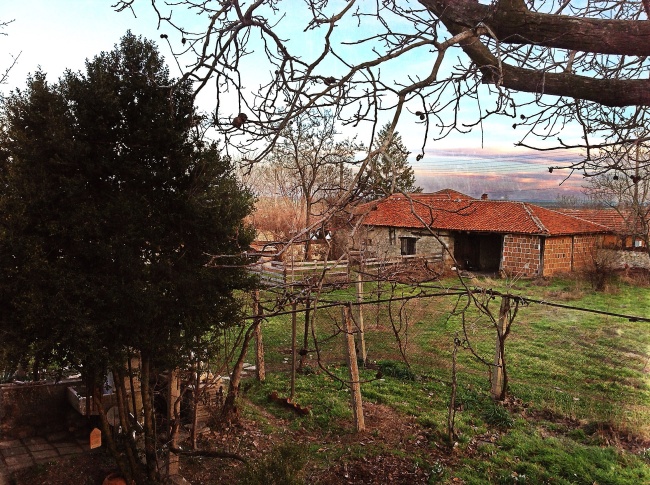 The moon finally receded after a nite of sleepless loneliness . How is it that a new day can appear so unlike the previous one and so suddenly like running deer on the road ahead the way they do back home in Michigan . In the last week the temperature has gone from close to zero to now 55 degrees and my hands are finally warm . I walked alone without my little pal today far out to the fields following the cows . There is an old cement bridge I like to sit on and today I stayed here ( photo below ) most of the day . 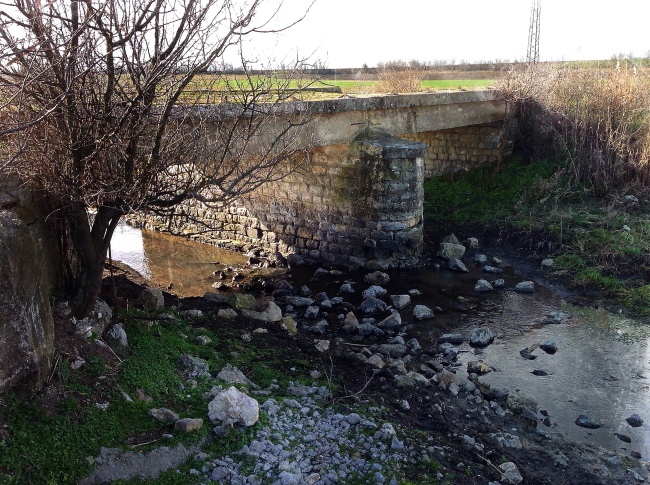 I love watching the sparrows and falcons and saw an eagle too , a bird of prey like Peter the Great , with its wide wing span floating over the valley gently like Ghandi . I’m sitting here with my notebook thinking of how I want to live my life when I return home and hoping I take Bulgaria and it’s creative and spiritual realm with me . I feel the eyes of God . Will the vibration follow me … the music …the harmonies … the memories of these days ?  Will you notice that I’ve changed , changed so much and that I am old now … the haunting of Bulgaria embedded on my face …